Exclusive videos
SÁBADO challenged four of the most prominent Portuguese entrepreneurs to incarnate known characters from science fiction movies. The difference is that these characters only lived on film and these people have become heroes in the flesh of the business world.

Over the course of the coming weeks we will release other exclusive videos with Cristina Fonseca, founder of Talkdesk, which already has offices in Silicon Valley and got an investment of 21,6 million; Marco Barbosa, creator of Esolidar online shopping site and elected by Forbes as one of the most promising entrepreneurs under 30; and Jaime Jorge, whose company Codacy won the Web Summit 2014. Codacy, a company dedicated to cleaning lines of code automatically, is striving to become leader in its business sector leader.

As in the startup world, in this special edition of SÁBADO there was someone who had a founding idea, and someone who played the incubator, the accelerator and even the business angel. But leading this work to its end – on newsstands and digital stores - required more people and, therefore, we invited award-winning professionals to work with our usual team.

SÁBADO was again chosen to partner with the largest newspaper in the world. ´This partnership includes 9 exclusive pieces, including an article by the CEO of Google, Eric Schmidt, on what can be done to make the Internet a better place.

Carlos Moedas, European Commissioner for Research, Science and Innovation; Helder Fragueiro Antunes, Senior Director of Corporate Strategic Innovation Group at Cisco Systems; Rohan Silva, guru of the startup movement and co-founder of Second Home, the coolest and most famous incubator in Europe; Bret Easton Ellis, author of books such as Less Than Zero, The Rules Attraction, and American Psycho; Jaime Lerner, Brazilian architect, urban planner, former politician and author of the bookAcunpunctura Urbana; Ji Shisan, pseudonym of Ji Xiaohua, PhD in Neurobiology, founder of Guokr.com and Guokr MOOC Academy, a science site, and also founder of Zaih.com, a service platform; Jeremy Langmead, director of brand and content of Mr. Porter, a global e-commerce site dedicated to masculine style; and Roger Cohen, a columnist for The New York Times, whose most recent book is The Girl from Human Street: Ghosts of Memory in a Jewish Family.

The illustrations area by Portuguese designer João Tae Castro, who has been the author of Adobe’s tutorials for several years and is one of the founding partners of Royal Studio. The graphics area by Sérgio Alves, winner of two Graphis Awards, a printing distinction in the US, and founder of Atelier d'Alves.

Web Summit
The biggest technological summit in the world moved to Portugal. We’ll tell you how, and we also interviewed Paddy Cosgrave, its creator and mentor and the most humane geek world.

Discover the stories of these Portuguese entrepreneus: Cristina Fonseca is in Silicon Valley with her company Talkdes; Nuno Sebastião’s Feedzai is one of the 50 fastest growing European companies; Farfetch was founded in London eight years ago by José Neves, but it moved far beyond its startup status since then: in March 2015, the company entered Wall Street Journal’s ranking of companies worth over a billion dollars.

The Fast Track VC fund has partnered with SÁBADO to support entrepreneurs with an investment up to US $ 1 million (750,000 Euros) – and a dedicated manager to assist in the application process.


Find out how in SÁBADO’S 124-page special edition – in a partnership with  The New York Times – now on newsstands! 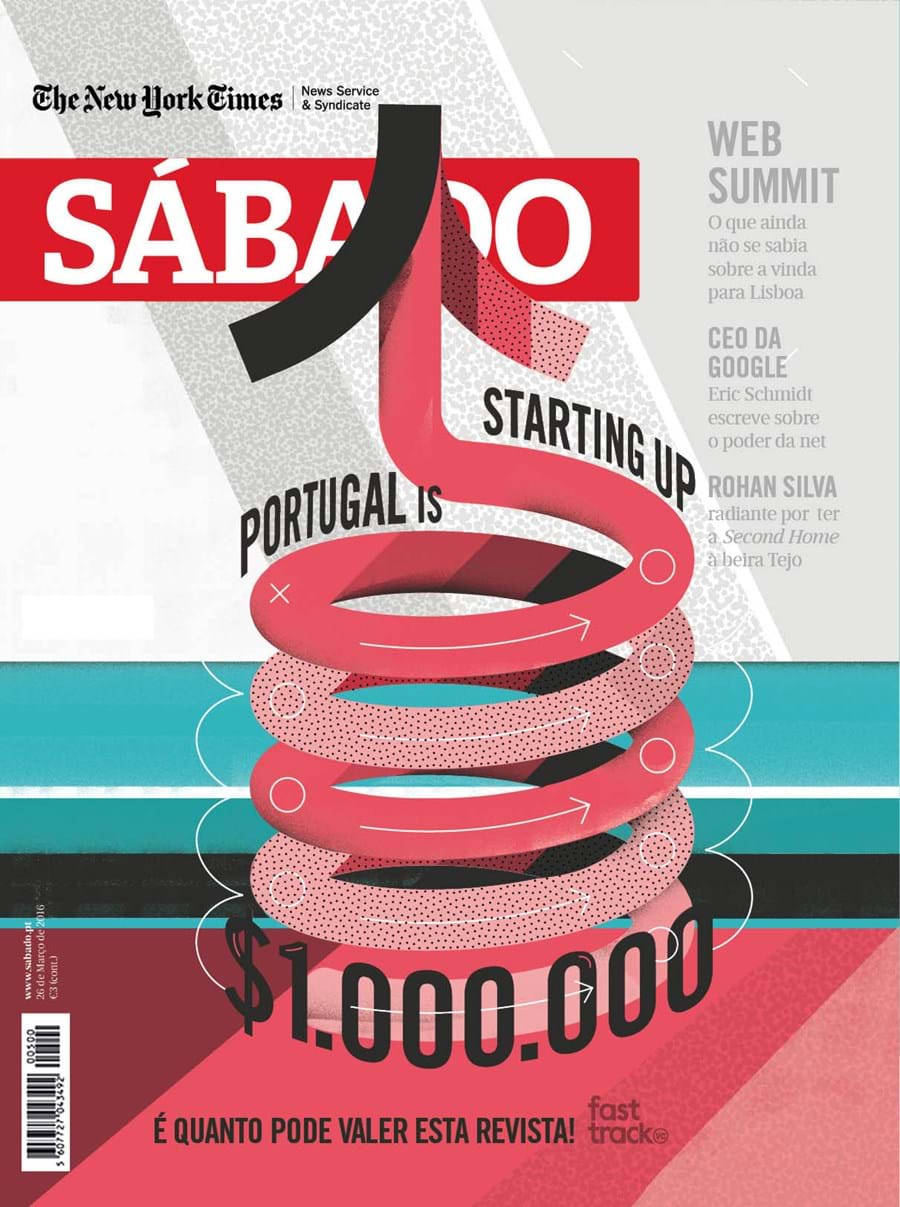